I hope everyone's new year is off to as safe and happy a start as possible, given the still ongoing pandemic and the general state of the world. here in the pacific northwest it's a typical gray and drippy late january day, but I have an exciting announcement I want to make :)

so to get right to it: I'm working on adding sound and music systems to bitsy + accompanying tools for the editor!

this is something I've been thinking about for a while: I started sketching ideas and doing research in early 2021, and I began prototyping for the project in earnest towards the end of the year. now that I feel confident in the direction that I'm going with it, I want to share some more details with y'all <3

sound and music have been frequently requested features for bitsy, and I've been interested in adding them for years, but I've always found the prospect a bit daunting, since I'm not an expert in music composition or synthesizer programming.

as I've started working on this project, I've been playing with a ton of different music and sound effect tools, and doing a lot of reading. if you're curious about that, here's a partial list of tools and articles that I've been drawing inspiration from:

when I think about the design of this update, my goal is for the new music and sound tools to be as "bitsy-ish" as possible. what exactly does that mean? it's kind of a feeling as much as anything, but to put it into words as best as I can, here are some more specific goals:

when is this happening?

what if I want sound in my game now!?

if you want sound and music in your bitsy games today, you can do that with the help of a bunch of awesome tools and hacks!

the built-in music and sound tools I'm planning to add to bitsy are not meant to be a replacement for the existing tools and hacks - those are primarily focused on playing back music and sounds composed in other tools and saved as standard audio file formats such as MP3s, OGGs, or WAVs. the built-in tools will be for folks who want to make music in the bitsy editor itself, so by necessity it will have constraints that external tools don't. I don't think it's likely that vanilla bitsy will ever support arbitrary sound files.

will there be a beta test?

probably! I'm not sure when though, or what exact form it will take. I'll post more details about that when I know :)

well technically, this update will be bitsy 8.0! ;)

but if you're wondering about the version I beta-tested in 2020, this update is something totally new.

when I last wrote about that beta I thought I might take some subset of its features and turn that into the 8.0 version of bitsy. however, I've since changed my mind and decided it would be better to scrap that code and start from scratch with this update. that said, I think I learned a lot from working on that beta!

I want to say thanks to:

well I think that covers everything! 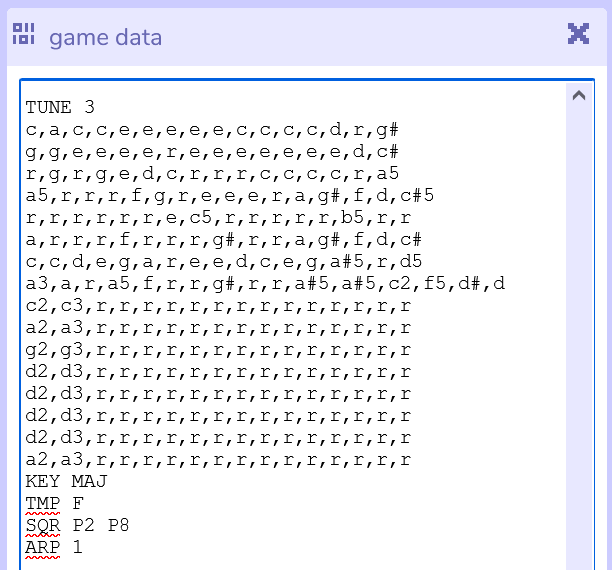 The Fantasy Consoles Discord server is back!

As of now, we have dedicated channels for: (35) Fantasy Consoles (18) Fantasy Computers (13) Engines and (6) Game Creation Systems.

Bitsy is of course included.

will this be a way to add externally created music and sounds to a bitsy game (like bitsymuse, but built into the bitsy system) or bitsy's own internal music creation program? or both?

the reason I ask is i enjoy using beepbox for my bitsy game music, but I always struggle using bitsymuse. I'd love a more intuitive way to add my songs to my games :)

it seems like it's a way to create music internally, as you'd still need to use external hack methods to add your own sound files. i recommend using the bitsymuse ui, it's been helping me a lot :)

Yeah that's correct, it will be an internal tool to bitsy. My thought is that the existing tools and hacks (like the one emsolaris links to) do a good job of covering the need for adding music from other programs.

Perfect! Now I can say I use Bitsy Vanilla.

Wohooo! Bitsy on a new level - Very much looking forward to this!

I am extremely excited about this! Question: if it's music AND sound does that mean there is room for me to continue making my music externally with something like beepbox and have bitsy handle sound fx?

I can't wait to experiment with that version !
Thanks for the detailed update, Adam !